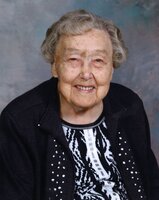 Peacefully, with family by her side, at the Chatham-Kent Hospice on Sunday, September 19th, 2021, Helena “Lena” Mazan (nee Missiaen) passed away at the age of 97. Beloved wife of the late Stefan “Steve” Mazan (2008).

Lena worked along side Steve on the farm for many years.  She was a lifetime member and Past President of the St. Michael’s Catholic Women’s League, Past President of the Canadian Belgium Dutch Club, a volunteer with the Canadian Red Cross for many years at their blood donor clinics and as a quilter.  She was also a past member of the Highgate Women’s Institute and volunteer for the Neighbourhood Watch.

Friends and family will be received at the Funeral Home, 76 Main Street East, Ridgetown, on Wednesday, September 22nd, 2021, from 3 to 5pm and 7:15 to 9 pm. A Funeral Mass will be held at St. Michael’s Roman Catholic Church, 26 George Street, Ridgetown, on Thursday morning at 11am. Interment to follow in Greenwood Cemetery, Ridgetown.

Those planning to attend the Visitation or Funeral Mass Must Register by phone (519-674-3141) or via the Funeral Home website.

The Bereavement Authority of Ontario has mandated that all in attendance must wear a mask.

Donations in Lena’s memory may be made to the Canadian Cancer Society, Heart and Stroke Foundation or Chatham-Kent Hospice Foundation. Online condolences may be left at www.mckinlayfuneralhome.com.