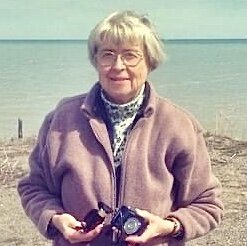 A resident of the Duart area, Louise Scott passed away at the Blenheim Community Village on Thursday, January 12, 2023 at the age of 93.

Born in Harwich Township, Louise was the daughter of the late Thomas and Vera (Toll) Ferguson.

Louise's life revolved around her family, her church, farming and the Mary Webb Centre. She taught for many years at various schools and was an active UCW member.

Louise enjoyed camping and the outdoors and loved having tea with friends and neighbours.

Donations made in memory of Louise to the Mary Webb Centre, Turin United Church or a charity of choice would be appreciated.

Share Your Memory of
Louise
Upload Your Memory View All Memories
Be the first to upload a memory!
Share A Memory
Send Flowers